Today, I decided to put up my Ring Floodlight Cameras. I am combining these with an already installed Ring Doorbell Pro. Much like the doorbell, installing these was more of a challenge than it should have been….

Since I installed my last set of floodlights in 2013, I figured I’d gotten enough use to make up for getting on a ladder again. I hate ladders! I hate ladders so much that I usually do a complete setup on the ground to make sure I don’t have to troubleshoot up in the air – and today, I was glad that I did!

I waited for months on end and was finally rewarded with a fantastic Black Friday deal on the floodlights. They arrived this week and today was my last chance to put them in for a while, so I got started before lunch. I started by unpacking the three floodlights – the packaging was complete, well designed, and included plenty of extra hardware to install as needed.

The next step was connecting each to my test bench and then powering them up. Each one started up as expected and I was able to connect each to my main Wi-Fi – an R7000 Nighthawk running DD-WRT, forward facing, with firewall. I actually have a second identical model running DD-WRT off the first router’s DHCP and load a commercial VPN through the startup script.

Once I had all three devices connected, I grabbed the short ladder to install the two floodlights going in the front.

Immediately, I noticed that the camera is not intended for horizontal mounting. The casing is shallow and the camera/motion detector have a limited placement range. The good news is that the camera has a very wide field of view, though in some configurations, the motion detection suffers.

What REALLY suffered, though, was connectivity.

I mean, it was brutal. I have a CBS (concrete block structure) home, so weak radios have a problem. However, my Wi-Fi signal is still 4 bars/ 26-28 RSSI outside the house. For whatever reason, the radios in the Ring devices are weak. The company recommends you place the devices within 30 feet of the router. One of the cameras was literally 11 feet from the router with two windows and was unable to connect (to the same network it connected to freely in my living room)

When I installed the Ring Doorbell Pro a few weeks back, I had to connect the doorbell to the included Chime Pro, acting as a custom Wi-Fi extender. I ended up connecting the garage floodlight to the same chime, but the light over the driveway still refused to cooperate. I brought all of the cameras back to my work bench and connected them to said chime. On installing them, I still had poor connectivity, so I started to brainstorm on ways to improve the situation. That ended with a trip to Lowes to pick up two more chimes – thankfully, with the contractor discount, plus the 5% off from using their card. I love Lowes!

When I got back, I set up one chime without a problem. I did the initial configuration on the other (third) chime, but then it wouldn’t connect when I relocated it. Really? I decided to deal with it after finishing the floodlights, so I got out the tall ladder and ran up the side of the house to install the last camera. This time, I had to call on my trusty assistant (and spouse), Jules. I’m TERRIFIED of heights, so when I go up above 8 feet, I kind of stay in one spot. Jules climbs a shorter ladder and hands me the tools and gear I need. Obviously, I don’t take pictures when I’m on a ladder. Too skeered.

After a quick (but successful) installation, I put away all the tools, and went back inside to finish setting up the chimes. After my initial success with the third chime, I was never able to get it to reconnect. I tried using a dropcord to get it closer to the router. I tried laying it on top of the router. It never connected, though the signal was great and all of my other devices were blazing fast – average uplink was 140 mbs.

I finally tried connecting it to my VPN router. Connected instantly. I said “screw it” and connected the other two chimes, as well, which migrated all of the cameras and the doorbell to the same router. I removed the VPN (adding it manually to a computer where I do my web browsing, but not coding) and also to the home theater computer where we watch anything except Netflix. I liked having the ability to connect any device to VPN, but I don’t use it on many connections regularly, and repurposing the router was better than buying a new one!

Please note – you can have more than one Chime Pro on your network. Further, you’re not connecting the individual devices to a specific Chime Pro. The multiple units make a wider network for the Ring devices to hop on to. That’s handy, though you better turn down the volume on your doorbell! Also, even with the extensive lengths I went through to get everything running, I still have weak signals at every location, though no device is farther than 14 feet from a Chime Pro.

By the time I finished everything, it was dark outside, which meant I was able to do a series of comparison pictures between night vision and shots with the floodlight on. I included captures from the doorbell using my front door light, as a comparison. I also found out that RA doesn’t play around when you stand on a ladder – my ankles, knees, and hips don’t care about home security!

Anyway, another project is done. One one hand, you’ve got a Wi-Fi plug connected to Alexa. On the other, you’ve got a custom sprinkler controller built on a protoboard with an ESP8266 module, reading weather data from a SQL database (collected via RFLink from your own backyard weatherstation). Most projects tend to lie in between, but that doesn’t mean that they will always go easy. This should have been a lot easier than it was. Between the fact that two of my lights were horizontal mounts and the extreme problems with weak signal strength, I find myself wishing I’d spent the afternoon troubleshooting my new doorbell transformer or fishing a new doorbell wire to solve the weak voltage I have at the door. 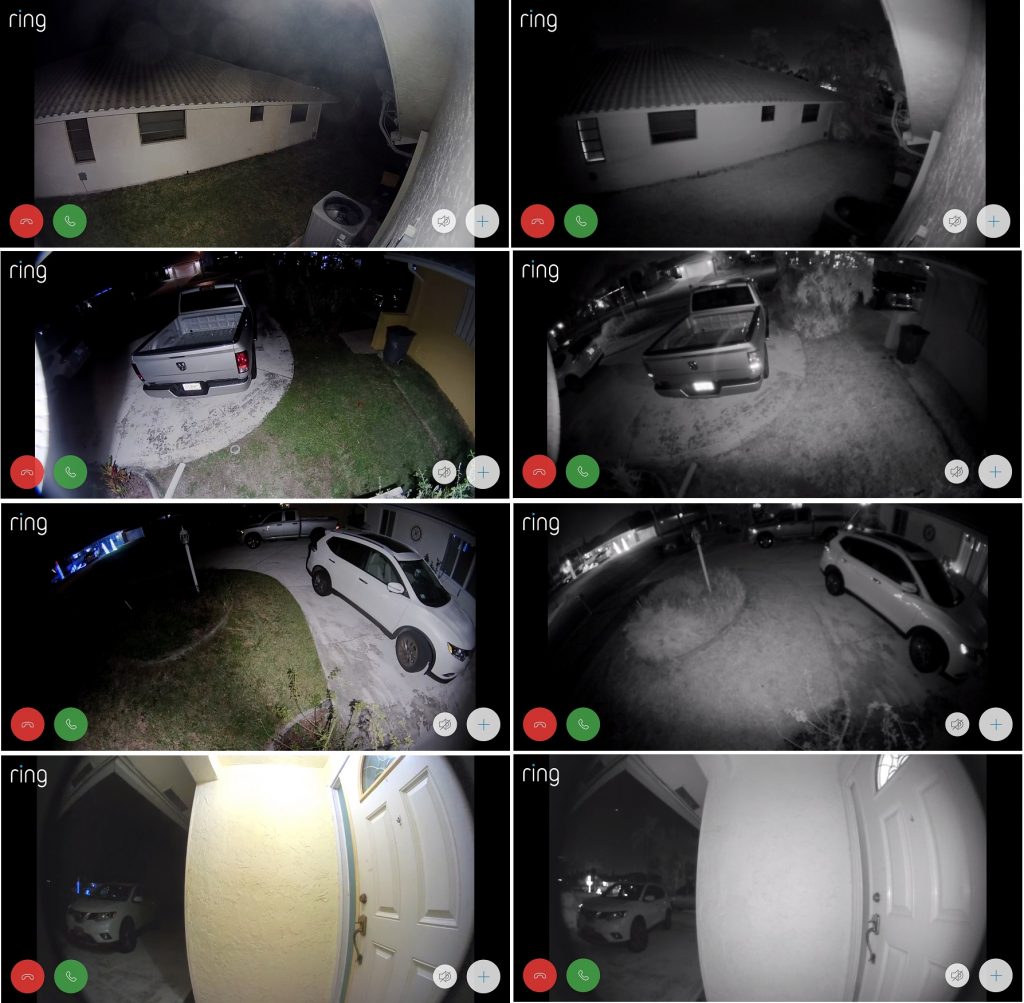