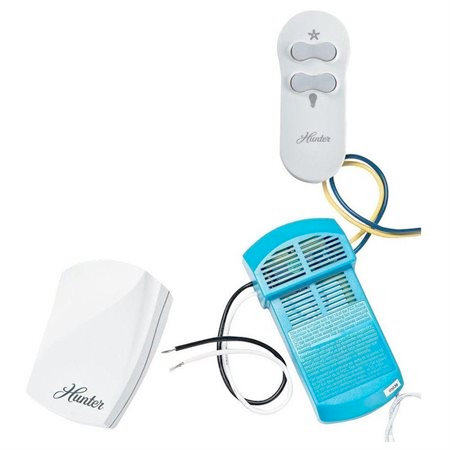 Kerry Clendinning from The Smarter Home Club has written up a new article for us covering Hunter SimpleConnect fan controllers and Home Assistant!

Before I started with any (modern) home automation projects, I was in the market for standalone remote control of two ceiling fans in the house.

Not knowing one day I’d have Amazon Echo devices and run Home Assistant (HA), the Bluetooth feature of the SimpleConnect fan controllers from Hunter seemed interesting. Note that my fans happen to be Hunter brand, and I thought the WAF of keeping with one brand would also score points, but typically the after-market remote controllers from other brands work with any fan.

Today, I have four fans controlled using Hunter’s add-on devices, they can be activated by Alexa, but need no cloud service for anything else, and are fully controlled by HA.

Now, before I go on, I’m going to point out that the Sonoff iFan02 didn’t exist when I started down this road, and it would provide a feature I’ll never have with the SimpleConnect devices, which is that HA can query the state of the Sonoff unit. As you will see from the information that follows, HA can never be sure what state the fans and lights are in with Hunter SimpleConnect.

The first thing to know about the SimpleConnect technology is that it isn’t really Bluetooth at the core. Hunter just added on to their existing 433Mhz RF system used by many of their fans and add-on controllers from before they ever even branded it “SimpleConnect,” I think.

What you get if you purchase the Bluetooth capable fans or add-on controllers is a little hub that plugs into the wall and can control a small number of fans, bridging the Bluetooth on you phone with the 433Mhz RF that’s built into the fan controller.

These hubs come in two flavors. One is Bluetooth-only. The other, which, I think, only comes with certain newer Hunter fans that have SimpleConnect built in, must also support WiFi, because they can be controlled by Alexa. To my knowledge, you cannot obtain the Hunter Alexa-capable hub without buying the fan it comes with.

I am certain that the hub that came with the add-on controllers does not have WiFi. As an aside, you can sell these hubs on eBay for a large portion of what you pay for controller+hub, so even though I’ll say you probably don’t need the hub, you might check the current selling price on eBay and see if might subsidize the price of the controller module and remote control by flipping the hub on eBay.

So all the actual controllers branded “SimpleConnect” built in or added to fans are actually 433Mhz RF. On the one hand, this is a good thing, because it means you can have a small remote control that independently controls the fan. We have one on each bedside table. But typically RF remote control is unidirectional. The remote (or hub) sends a short signal, hoping the fan will receive it and act appropriately. If the signal is missed due to radio interference or a weak battery in the remote, there is no automatic resolution of the problem. Fine with a physical remote, you just push the button again (really hard this time) and it usually works. With a home automation system, this can be problematic. (Note: Even though the iFan02 also has a remote, there is WiFi and other smarts in the device, so when HA controls it, it can sense the state of the fan.)

The Bluetooth feature of the SimpleConnect fans didn’t turn out to do much good for me. It was kind-of gee whiz to be able to control the fan and light from a tablet or phone, but like all standalone phone apps, it’s a little clunky. It takes a long time to start up, so it’s way easier to just reach for the RF remote control. As far as I know, the Bluetooth protocol hunter uses is proprietary, so it didn’t get me any closer to HA and Alexa control.

Then I learned about products like Bond that can control 433Mhz RF devices. I was briefly interested in that particular brand when it was all I knew about. Before long, though, I found a much less expensive, and, I believe, much more powerful device, the Broadlink RM Pro, which also has 433Mhz capabilities. (Certain models of the Broadlink add 315Mhz, too, but I didn’t know to look for that, and ended up with 433Mhz-only.)

The really good news is there’s great integration between HA and the Broadlink devices. I do not use the Broadlink phone app or any cloud-dependent features. The Broadlink is just a bridge between HA and 433Mhz devices. Now if I remember correctly, I had some trouble getting the Broadlink to learn the Hunter remote control codes. Before this story ended, I also invested in something called RFLink which let me do a lot of in-depth analysis of how the Hunter RF protocol works, but that’s beyond the scope of what I want to cover here.

With HA connected to the Broadlink, there is no need for the Broadlink to learn and store any codes, meaning there is literally no limit to the number of devices you can control. The details of interfacing Broadlink and HA, and how to send the Hunter-Specific codes would take another thousand words, so I leave that to discussions on our Facebook page if people are interested. I can tell you more about which models and remotes are interchangeable and which ones have additional features like speed control and light dimming. I’ll leave it at all-in-all I’m very happy with my Broadlink and the control it provides over my Hunter fans.

One additional note, if you are simply looking for an inexpensive way to control a fan, you don’t need the hunter app or their remote, you can simply purchase the controller on its own. You’ll need some way like with the Broadlink RM Pro, to generate the required 433MHz signal to pair with the controller.