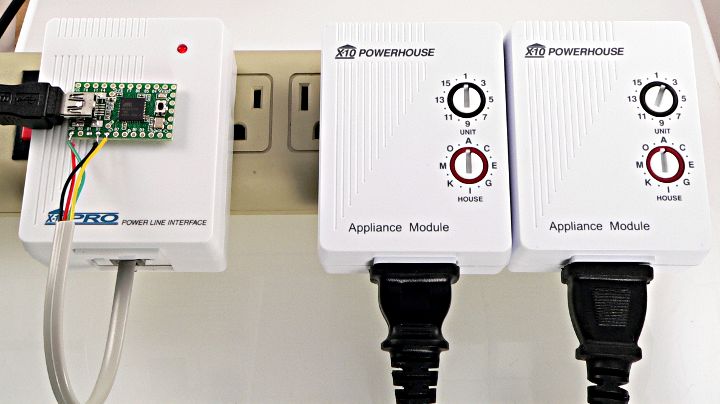 Another recent “mini project” that I’ve done recently was to add a 220v dryer outlet in the garage by my circuit breaker. I’ve included an explanation for why I did the install in between the pictures!

I’ve got a couple of boxes of X10 light switches, 110v outlets, sensors, and security gear sitting in the floor of my office. My wife would LOVE for this stuff to get out of the way, so I need to start installing the components I plan to use. Unfortunately, there’s a big drawback with X10.

X10 is a power-line automation technology invented in the 70s in Scotland. Its signals piggyback on your home’s electrical wiring. It was widely used for decades and is a safe, reliable technology that has been in hundreds of thousands of homes and businesses. I even discovered (a few years after he’d passed away), that my father used X10 with automated packaging production lines at his job with Revlon. Small world!

The one critical flaw with X10, though, is that signals often have to travel back to the service origin for your home in order to pass from one leg of your service to the other. That means that a signal from the controller in your den could have to go out to the light pole and back in order to turn on a light in the next room, depending on which side of the service the breakers are on.

The solution to this is to use a signal coupler. The simplest ones plug into your dyer’s outlet and allow you to plug your dryer back in. These are usually adequate if you don’t have a lot of noisy devices or there are a limited number of circuits in the panel.

For a modern home, with microwave ovens, computers, home theater, and more “noisy” gear, filters help, but you really need to boost your signal as well as using a coupler between the two legs.

My choice is the XTB-IIR from JV Digital Engineering. I bought mine well over a decade ago, but it still works like a champ. The week before this install, I spent a few dollars for a firmware upgrade, which came via IC in the mail two days after I ordered it.

The XTB-IIR grabs the signal from X10 components, then repeats it on both legs of your electrical service, while boosting the strength of the signal about 10 times. It does an amazing job – if you want to use X10 in a home with lots of electronics and appliances, I can’t recommend the XTB-IIR enough.

While it isn’t an overly complicated install, make sure you know what you’re doing before you pop a hole in the side of your panel and stick wires into a breaker!